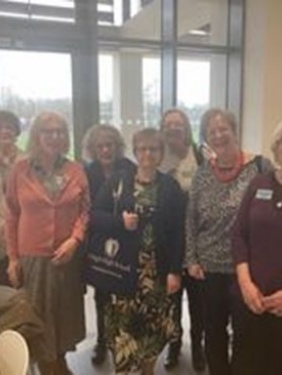 On Saturday 5th March, Old Girls and former staff from nine decades of the school’s history converged on the Banbury Road site for the second OGA Lunch and AGM at the new school.

Mannequins dressed in the school uniforms from the 1930s and 1970s greeted the guests on arrival, as did refreshments and a collection of Ilexes from years gone by for their perusal. Eleven highly polished prefects gave tours of the new school site, including the brand new Music School; one of the prefects gave a tour to her own grandmother!

It was a first Annual Lunch for new Head Master Dr Stephen Burley, who was delighted to welcome the guests onto the new site. He gave a brief overview of the school in 2022, before OGA Secretary Polly Beidas and Treasurer Sarah Phillips launched into the AGM. Outgoing committee member Jennifer Edwards was presented with a painting of Chapel Street from the brushes of King’s High teacher Dr Mike Barwell, in recognition of her many years’ service to OGA, several of them as Secretary.

Head Chef M. Christopher Charpentier had surpassed himself with a sumptuous three course lunch with wine, accommodating a variety of allergens and special dietary needs. Few can believe the members of the school dine like this every day – apart from the wine, of course.

A raffle for the guest speaker’s chosen charity, Arts Insight, raised a goodly amount to enable disadvantaged children to attend life-changing courses in drama. But the pièce de resistance of the day was a fabulous talk from Old Girl, business consultant and Artistic Director of the Loft ThEatre, Leamington, Mrs Sue Moore (née Ashton). Sue had been one of the first King’s High girls ever to study business back in the 1960s, much to Miss Hare’s consternation, but had managed to combine a stellar business career, with clients such as Sony, Microsoft and the Dorchester Hotel, and her fascinating hobby of drama – truly ‘the best of both worlds’. Although Sue admitted to being ‘in her seventies’, the advice she gave was very much attuned to twenty-first century ideals, and was keenly sought by the younger Old Girls in the audience. She was keen to stress that we all must follow our dreams and passions, asking us to tell companies what we could offer to take their businesses forward, rather than being trammelled by a narrow job description. After all, as she told us, Martin Luther King said ‘I have a dream’, not ‘I have a thirty six page business plan’!  This sparkling talk ended with an entertaining monologue from Alan Bennett’s ‘The Lady in the Van’, with Sue playing the part of Mary Shepherd, a role made famous on stage and screen by Dame Maggie Smith.

A rousing chorus of Jerusalem, now in its 98th year as the school song, ended the event, and once again nobody had forgotten the words after ten, forty or even sixty years away from school.

Please join us for next year’s OGA Annual Lunch and AGM on Saturday 18th March, 2023, when our guest speaker will be Old Girl, newly qualified doctor and aspirant Olympian Dr Felicity Bee (KHS 2009 – 2016).